A close look into one of the top trends to be disrupting the automotive and insurance industries in a short, medium or long term. Autonomous vehicles are to be putting upside down the legacy held so far in the sector and shining light on a better solution for mobility environment and society wise.

Sit, stay, drive. Autonomous vehicles have been in the mobility scenario already for a while, whereas in the research, development or testing areas. Nevertheless, they still remain as a recent technology, something new and as so, where there are yet some points to be connected. The automotive industry is going through one of the biggest disruptions so far faced, and the Auto insurance sector seems to be in front of its greatest dilemma: new needs, new challenges, new opportunities.

Hitting the roads, changing the society

With the continuous development of autonomous technology, mass-produced self-driving cars will progressively hit the roads, changing traffic, ecosystems, and our lives. This is not a simple technological transformation, but a change of paradigm in the way we perceive mobility. AV not only reduce the travel time and transportation costs, as well as make it more effective, but they mainly help in reducing traffic congestion, lowering fuel consumption, reducing CO2 emissions, and most importantly, reducing accidents. In simpler words, autonomous cars are already facilitating transportation, at the same time that they have come to improve social, environmental and legal frameworks.

NTT DATA in their report When the car takes over proposed a glimpse into what was about to come in the future for autonomous driving. In their accordance, three scenarios can be foreseen: one for around 2020, other for 2050 and the last one for 2060. In the first one, AV would be sold commercially, but still not widely used. This share would increase significantly for the second proposal, in which this model will predominate in the roads. Finally, only by 2060 fully-automated cars will be the only type of vehicles available. 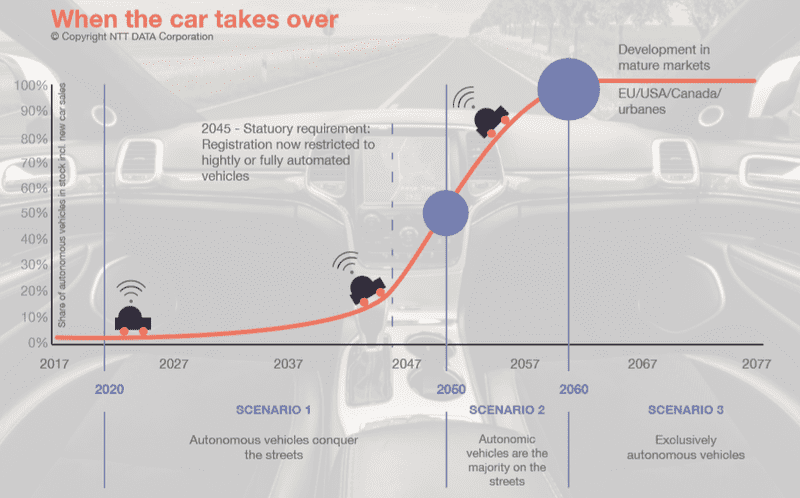 Testing the future of AV

These proposals weren’t far from reality. Neither was that of one of the biggest tycoons of the sector, Elon Musk, who predicted in 2014 that self-driving vehicles would be on the streets around five to six years after. That means today. He did not envision wrong, as several enterprises, startups and even TechGiants are strongly investing in this technology. Waymo, Alphabet’s self-driving unit, has already carried out successful trials of AV in the United States, testing these for a new business model.

Furthermore, according to NTT DATA latest Insurtech Global Outlook 2020 report, while Google’s parent company keeps the leading role within the Smart Mobility ecosystem, other Giants as Alibaba and Baidu are also strongly investing in the autonomous cars disruption. In fact, this latter Asian Giant launched Baidu Apollo, a $7.47 million government contract to provide autonomous driving solutions for a road-testing project in Chongqing, in Southwest China. This Level of autonomous vehicle-road coordination system pretends to increase the capabilities of the car to understand the surrounding road conditions as a result of an interaction between smart road infrastructures and self-driving cars.

In the same line of events, Toyota Research Institute-Advanced Development, Inc. (TRI-AD), Maxar Technologies, Inc. and NTT DATA Corporation joined forces in 2019 for the building of automated HD maps for autonomous vehicles. Using high-resolution satellites imagery and TRI-AD’s software Automated Mapping Platform, these enterprises have started to create a AMP for a determined area in Tokyo, but have opened up the possibility of supporting automated mobility in all roads in the future on a “fast, scalable and cost-effective basis”.

Likewise, General Motor’s subsidiary Cruise intended to start deployments in New York, but safety concerns and lack of regulatory approvals generated delays. The problem lays on the thin line that exists between human intervention, known as “disengagement”, and failure of the autonomous system. In order to get approved by law, all companies testing self-driving cars on public roads are required to disclose the number of miles driven and the frequency in which human safety drivers are forced to take control of the AV. Cruise’s incident occurred when one of its self-driven cars ran a red light in San Francisco once the safety driver took control to avoid blocking a crosswalk.

Where does the legal standards sit?

New liability issues need to be held in order for AV to penetrate as foreseen the market. In Europe, 74 countries have signed the Vienna Convention on Road Traffic that, until 2014, forbid any self-driving vehicles in the roads. After its amendment, the use of autonomous vehicles is allowed with the condition that the driver can take control at any times. In simpler words, these countries remain in level 2 or 3 of autonomy. The priority for European countries remains to be data protection, so the acceleration and implementation of these technologies will have to adequate firstly to the ethical parameters to be able to penetrate the industry.

In China, on the other hand, the government has declared national priority to become leaders in the autonomous technology, and that is why it is the country which currently has the leading role in miles ran with AV systems. Likewise, in the United States, despite each state establishes its own laws on the use of autonomous vehicles and, since 2012, only a few of them have considered this new modality of mobility in their legislation, the interest of American-based companies on this technology seems to be speeding up the process.

Safety, and therefore regulatory approvals, comes hand by hand with technological requirements. There is a whole world surrounding autonomous cars; what NTT DATA’s report calls The Self-driving Vehicles Ecosystem. From the traffic infrastructure, to the automobile interior design, the 5G mobile radio needed and the road users, there are some technologies that are indispensable for this modality to develop correctly.

Firstly, already mentioned, 5G connection is the most adopted technology for direct car-to-car and vehicle-to-everything communication. Better networks with higher performance capability will enable IoT in autonomous cars. These will be equipped with sensors that make them smarter and that generate, at the same time, huge amounts of data. The higher the quantity of data, the faster the network needed for processing and analyzing it.

Additionally, these data must be stored, and no amount of computers in the world are able to do it. As a matter of fact, the estimate of storage requirements resulting from radar, LIDAR (Light Detection and Ranging) and camera is between 4 to 10 terabytes per day. Thus, Cloud technology becomes imperative. A MIT design shows that data flows from the sensor information to the cloud platform, where it is first mapped to plan the path for the car, and then sends it back to the vehicle where the controller executes the received data.

The greatest dilemma among the technological disruption on the Auto insurance ecosystem is how insurance will be needed if with all these advancements accidents are reduced and driving will become safer. Nevertheless, is just a shift in the needs. The autonomous vehicle will disrupt gradually according to the development of the suitable infrastructure, but is foreseen to be impacting significantly the insurance industry.

On the one hand, although it is predicted that AV will reduce accidents, these will still occur as long as humans are involved. Therefore, particular insurance will have to adequate to the possibility of covering the different levels of autonomy driving: fully autonomous or semi-autonomous. Furthermore, if with autonomous vehicles the driver does not own anymore the car, why should he, then, hold liability? As the ecosystem moves from car-ownership to mobility-as-a-service, risk assessment slides off the hands of the driver and auto insurance turns more fleet-oriented.

Hence, it is not just an upgrade in terms of technology, but a shift in the business model. With autonomous driving a whole new insurance panorama is born in which vehicles play part but do also infrastructure and OEMs. Therefore, not only new products will need to be launched as for clarifying insurance issues, but all the different actors of the ecosystem will have to play together. There will no longer be a linear structure from manufacturers to sellers to insurers; rather, these will either have to work jointly or vertically integrate their businesses. Tesla, for instance, launched in 2019 Tesla Insurance, which with the information they control as manufacturers in regards to technology, safety and serviceability, can quantify the risk more precisely and offer lower prices, saving drivers up to 30% off in comparison to regular insurers.

On the other hand, cybersecurity will play an important role firstly because of the relevance of cloud solutions. In this sense, insurers must guarantee the Product Liability Insurance in those cases in which the cloud delivers software glitches. In parallel, new damage coverage policies will have to be created to protect against unauthorized entry into vehicles or ransomware attacks. This will lead to a change in the business model, as insurance companies will need a new infrastructure, architecture and application model to deliver agility, flexibility, scalability and security in their cyber coverages.

Neither better nor worse, different

Scared to the dilemma of Auto insurance and the possibility of being threatened by new technologies, insurance companies must work hand by hand with TechGiants, startups and other agents of the ecosystem to adapt themselves to the new reality. The only way to survive to the markets demands is to turn the challenges of this new panorama into opportunities.

These steps will represent an improvement for everyone involved in the Smart Mobility scope, from the manufacturer and the insurer, to the end user. Autonomous vehicles will in a short, medium or large term turn the mobility scenario upside down, bringing new possibilities of transportation and newer business models across industries.