I Spy With My Little Eye: VI-based Damage Calculation

NTT DATA Insurance
About the authors

As an established branch of the industry, motor insurance is often at the limit of profitability: Up to 80% of all costs are incurred by claims payments - if you look at comprehensive insurance in Germany, annual claims expenditure sum up to over eight billion euros. Between 20% and 30% of the additional costs are incurred by operating expenses. At the same time, the expectations of insurance customers are constantly increasing in the digital age.

In order to meet these requirements and concurrently generate economically optimized processes, the claims process should not only be automated as much as possible, but also designed intelligently. For this reason, some insurers are already using Artificial Intelligence (AI). However, there is further automation potential for the sub-process of claims calculation within claims processing: Visual Intelligence (VI).

VI’s are specialized in perceiving visual stimuli, interpreting them, and then drawing and implementing conclusions they have derived from the images. Within claims processing, VI can thus achieve an end-to-end automation, especially in the case of fictitious claim settlement.

The usage of VI-based damage calculation is not only beneficial for the insurance company, but also results in clear advantages for the customer. The policyholder has many options to choose from for claim reporting, also when conducting a VI-based calculation. For example, the digital way via the insurer's website/web form or an app can be used, but traditional routes such as a phone calls to the broker or agent are also possible. An entirely automated initial contact by means of telematic sensors in the customer's vehicle is also possible. The customer is offered a high level of accessibility as well as various communication channels as part of an omni-channel strategy. Once the customer has submitted the claim and the "First Notification of Loss (FNOL)" is available to the insurance company, the policyholder is requested to provide pictures of his damaged vehicle via SMS (1). The superimposed vehicle mask supports the policyholder to taking usable images for the VI-based calculation (2). In addition, relevant information can be retrieved by means of data enrichment: For example, the mileage at the time of damage or the vehicle identification number (VIN) can be recorded using optical character recognition (OCR), as well as the damage location via the smartphone's GPS sensor (3).

After the damage reporting process, visual intelligence comes into play. It processes the images within two milliseconds and then generates a detailed damage calculation. It is also possible to integrate plausibility checks (e.g., by analyzing previous claims), which could be used for a subsequent fraud detection – all of this in real time (4). 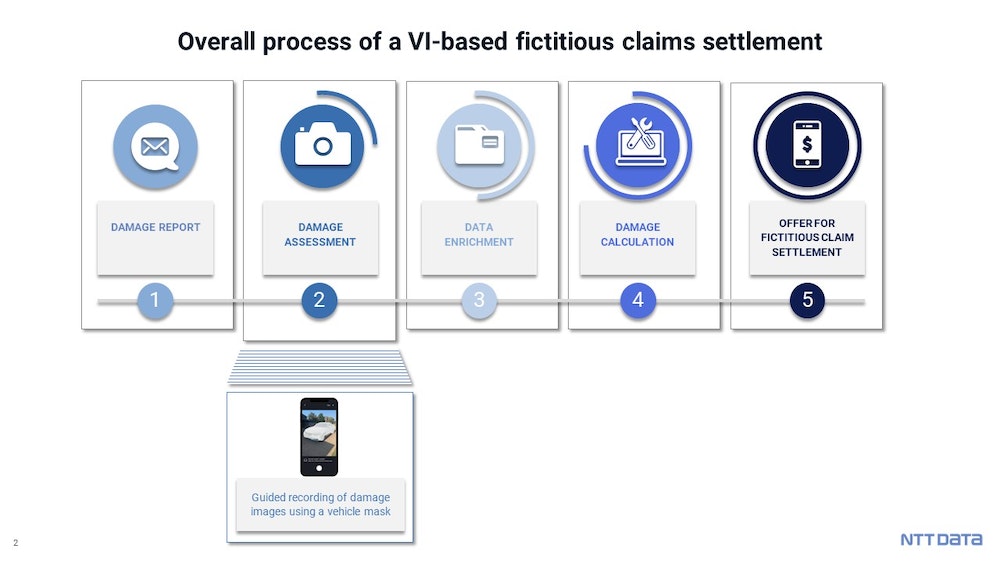 The insurance company can then opt for additional validation by an expert. Once the policyholder has provided the insurance company with the images of the damaged vehicle, the insurer can offer the customer a cost estimation in form of a fictitious settlement within a few minutes (5). The entire process using VI-based calculation takes less than ten minutes. Through an End-2-End automation of the claims process, insurance companies can reduce the workload of their claims handlers and experts by up to 30%. This allows them to focus on more complex claims or those with increased fraud potential, and moreover, claims leakage can be prevented.

VI-based damage calculation can be applied beyond claims to many additional use cases such as the optimal preparation of the vehicle repair at the workshop. As soon as the proposed calculation has been confirmed by the insurer, the workshop receives both the detailed VI-based overall calculation and the images taken, as well as the repair release from the insurer. This enables the workshop to plan and prepare repairs, for example ordering necessary parts, even before the damaged vehicle arrives. Up to 30 minutes can be saved by using VI-based damage calculation, and the repair can be carried out more efficiently.

There are several advantages for insurance companies and their customers when making use of VI-based loss calculation. Having a portfolio of 124 million insurance contracts, motor insurers represent the largest segment of German property and casualty insurance. While premiums and benefits have been continuously rising with the pandemic and are now picking up even more speed, customer needs are also developing rapidly: The shortest possible processing times, including fast payment in the event of a claim, and increased contact availability of insurers are the basis for high customer satisfaction. By optimizing the response and processing time - including a payout in the context of a fictitious settlement - the Net Promoter Score (NPS) and thus customer satisfaction can be increased substantially. The insurance company also benefits from a reduction in claims costs and thus, meets both its customers’ demand for efficient overall regulation and its own requirements for an economically optimized overall claims handling process. 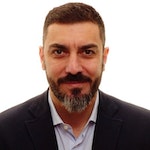